KPVoice Studio was established by professional vocalist and performing arts educator, Kacey Patrick in 2018, providing a singing tuition and vocal coaching service to the southern Gold Coast and Northern NSW. Kacey has 20+ years as a professional vocalist, touring artist and performer. In recent years she has written, directed and produced musical theatre productions for primary schools and she presently facilitates and leads the Just Sing! Community Choir, based in Tugun. In 2016, Kacey completed a Post Graduate Certificate in Music Studies (Vocal Pedagogy) at the Queensland Conservatorium of Music, Griffith University and she is currently enrolled in the Masters of Music (Vocal Pedagogy).

Kacey has brought her knowledge, and her intimate and intuitive understanding of the voice, to the realm of education. She loves working with all students of all ages, helping them to discover their expression and their unique voice within. Kacey believes that everyone can sing and that is often emotional blockages or old systems of understanding that inhibit students from truly feeling free to engage with joy of singing. She is passionate about helping students to transcend vocal barriers and held systems of belief, expanding and enhancing their vocal ability and their confidence as singers.

Kacey is best known for her work with guitarist Aaron Hopper in the guitar/vocal duo stringmansassy. From their beginning in 1996, stringmansassy evolved into one of the foremost independent performance duos in Australia. Their repertoire, an evocative fusion of jazz and folk, expanded the expected realm of guitar and voice. As stringmansassy, Kacey and Aaron toured extensively throughout Australia, also touring to Germany, Austria, China, Japan, Singapore and New Caledonia. Highlights of their 12 year career included participation as members of the Australian Arts delegation to three World Expos (Hannover 2000, Aichi 2005, Shanghai 2010).

As a  vocalist, Kacey has also performed at festivals, events and venues throughout the country. She was the featured vocalist for the Scenic Rim Commonwealth Games 2018 celebrations and the 2017 Woodford Festival Opening Ceremonies and Fire Event. She has performed with The Camerata of St John’s, The Saruzu Quartet, with Linsey Pollak in the award winning production “The Dream of Zedkat Nabu”, and with “Women In Voice”.

… a voice so smooth and precise, it is like listening to a melting ice sculpture …

Kacey Patrick is a unique and wondrous vocalist who has evolved her enigmatic sound over a variety of styles, including jazz, folk and world music. Her three-octave vocal range is a rare instrument and as a conduit for the voice and sound, Kacey uses her vocal range and abilities to their full, combining sublime vocal intuition and beauty, with instinctive risk taking and vocal soundscapes. Her voice is not merely a communicator of words and lyrics. It is an instrument, both melodic and percussive, with which she creates an evocative and unique musical experience. Her passionate expression, captivating performance, vocal intuition and profound understanding of her instrument, often leads her audience on a deeply connected and bewitching journey where the boundaries between sound and emotion became blurred and indeterminate. 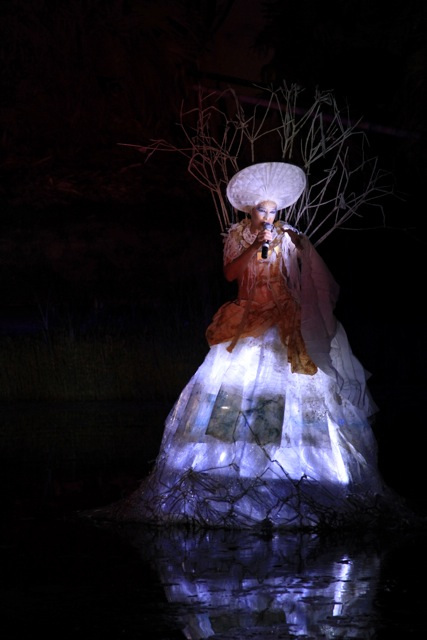